A lot has changed since the last time I went car shopping.

On the surface, there’s no good reason to compare a brand new Cadillac Escalade to a 2001 Ford Ranger. But the idea to do just that came to me as I piloted the 2021 luxury SUV through the San Juan Mountains while scrolling through the massage settings built into my seat.

You see, up to now, I was pretty excited to watch wipers that actually moved stuff off the windshield instead of just smearing it around like finger paint. And the fact that there were working, adjustable mirrors on both sides of the car — holy cow!

But with each passing mile, a new convenience came to light. Some highlighted glaring design omissions in cars from 20 years ago, like allowing passenger and driver to have different-temperature air blow in their faces (or hey, none at all!). While others solved problems I didn’t even know I had — did you know you can just display map navigation on a dash panel? Crazy! 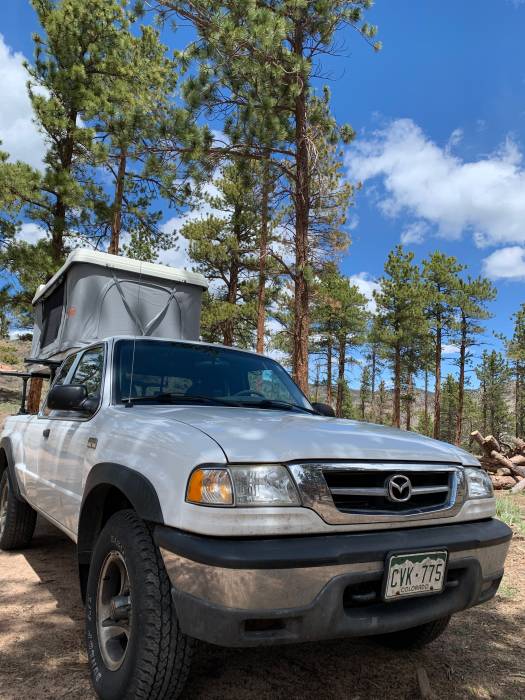 Still, not all that glitters is gold. In the 600-plus miles I test drove the new Escalade, I learned the inexorable march of progress doesn’t always make things better. There are some things we shouldn’t take for granted in the vehicles of yore.

And my 2001 Mazda B4000, a made-in-America twin sister to the celebrated Ford Ranger (built on the same chassis at a Ford factory), proved that even in her old age, she’s still got it.

With only a few exceptions, someone considering a brand-new Escalade isn’t also looking at buying a midsize pickup. They’re different machines that fit different needs. So I’m not here to help you make a purchase decision.

But I do have a unique perspective. The last time I went vehicle shopping, I could still choose between power mirrors or that little analog joystick that popped out of the door (good luck on the passenger side). So the feature set I’m used to on a car — and the driving experience it brings with it — makes me a relic. I’m like a living, vehicular fossil record.

Anyone who’s kept up with modern car technology might take for granted everything that simply blows my mind. Hot air comes out of the seat! So I want to shed light on what designers and engineers got right in the last 20 years — and what they didn’t.

Let’s start with the good. And to repeat, these are all features that did not exist — or were very rare — back in 2001.

I shudder to think how many perfectly viable parking spots I’ve missed in the last two decades. Hours of my life wasted circling the block because a spot looked too tight.

If only I’d had a backup camera! My truck is less a cruiseliner and more a dinghy, but the only way to know is to see how much space is behind. Even the leviathan Escalade can squeeze into most city spaces.

I’m old school and think that bumpers are for bumping. But since you can’t so much as sneeze without setting off a car alarm these days, cameras are the way to go.

Not only will this big SUV beep when it senses an obstacle, but the dash display also shows a zoned color-coded warning — green, yellow, red — as it nears impact.

Even if you’re not paying attention to those, you’re sure to take note of the seat vibration that alerts the driver anytime the Escalade senses an impending collision.

By comparison, my current crash-detection system consists of a lot of broken glass and only works in very close range — like zero feet and under.

The music selection in my truck is whatever the radio wants to play. And sadly, it turns out compact disc players lose their appetite for CDs after 20 years and just spit them out all the time.

Thank heaven for Sirius XM radio! And by that I mean, thank heaven for Classic Rewind. Truthfully, I stumbled onto satellite radio by accident trying to find maps. It seemed like way more trouble than it was worth, with hundreds of channels like “The Blend,” “Pop Rocks,” or “Octane.”

But when I stumbled onto “Classic Rewind,” it was game over. I could have listened to Journey for another 6 hours.

Not gonna lie: It took me a sec to understand why the center console/armrest was cold on the inside. But after I reached into the backseat for a warm soda on my mini road trip, the lightbulb went off.

I can’t tell you how excited I was in 2004 when I got my hands on a 12V adapter for the heretofore unused cigarette lighter in my truck. At long last, that thing got some use. And I could charge my Blackberry!

As for the snaking cords dangling in front of my (sweet) AM/FM radio and (not-yet useless) CD player, well, those were a small price to pay for portable power.

Twenty years later and cars now carry the magic of wireless charging! An illuminated slot in the middle of the console accepts your smartphone and automatically pairs the device with all sorts of Escalade voodoo: Apple Car Play, Navigation, calls and messaging, and everything else I never figured out.

Once I discovered that that third dial on the side of my seat activated and controlled a variety of massage settings, I realized I’d arrived in the future. By itself, a chair that vibrates — or really does anything besides just sit there — is impressive.

But the Escalade allows you to choose from an array of therapeutic settings: wave, knead, roll, and anti-fatigue. For long drives or gridlocked commutes, this may be my absolute favorite innovation.

There’s a great quote from “Jurassic Park” that perfectly captures my issues with this 2021 model of technological innovation: “Your scientists were so preoccupied with whether or not they could, they didn’t stop to think if they should.” — Dr. Ian Malcolm (aka Jeff Goldblum)

When I got to where I was going on my road trip, it was dark and I had to unpack some essentials for my Airbnb stay. I shut off the Escalade (with the push of a button!), opened the back door, and … nothing.

No interior light. No automatic dome light. Though the Cadillac’s interior roof was lined with lights, none turned on. That convenience was commonplace even on my truck.

I’m sure there’s a switch somewhere to toggle the auto light — but have you seen the inside of a 2021 Escalade?! It’s like mission control. Damned if I know where it was, which brings me to my next point …

I realize I sound like an old man unboxing an iPhone (I’m 38), but I honestly could not find the radio! At one point, I wanted to flip through some local stations and was stumped when I didn’t see a knob or big AM/FM button.

I wasn’t comfortable scrolling through all the menu screens while driving, and I was downright terrified to start playing with the random array of buttons dotting my steering wheel. So I resigned to just not having a radio during my trip.

Sometimes, the Cadillac couldn’t tell whose phone to talk to, mine or my girlfriend’s. Since there’s only one wireless charging port, she charged her phone via cable and USB outlet. But the Escalade continually switched between her phone and mine. And it became a pain to manually swap — especially in the middle of navigation.

I’d rather have a dumb car that minds its business than a smart one that keeps asking questions. 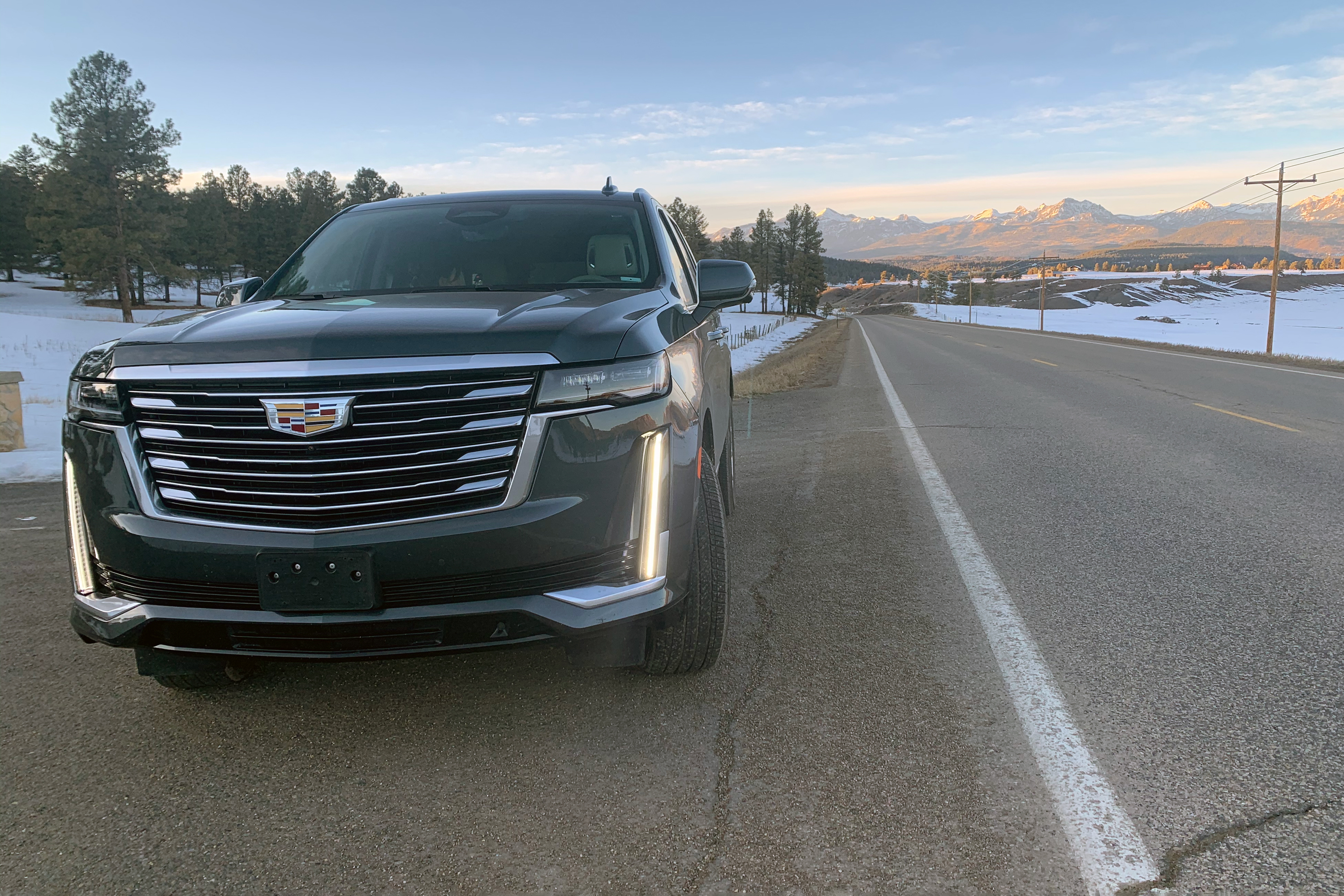 The Escalade has outstanding headlights — but only if you’re inside the vehicle. For everyone else, they’re a blinding nuisance. I know because every oncoming driver kept flipping their brights at me. But my brights weren’t on; the low beams are just that bright (not to mention the Escalade stands much taller than most other vehicles).

And I can empathize with my fellow drivers. I’ve cursed other luxury SUV drivers for not giving a damn about others. Turns out, it’s not their fault. The best solution I found was to leave my brights on as a default, so when oncoming cars appeared, they’d see me flip the lights down.

Another solution for owners would be to simply adjust the headlights more downward. But this is something you’d hope wasn’t necessary from the factory.

Too Hot, Too Cold

If it’s not clear yet, the Escalade is a complicated machine. Nowhere is that more evident than on the vehicle’s main control center in the center dash.

But while I could move the temp setting up and down (I can tell because the numbers changed), I couldn’t figure what the other 15 buttons next to it did. I tried pressing them, but that just turned on different fans and at different speeds — and I assume in different parts of the vehicle.

I prefer one 360-degree dial — half red, half blue — and another that changed the intensity, from barely noticeable to jet engine. 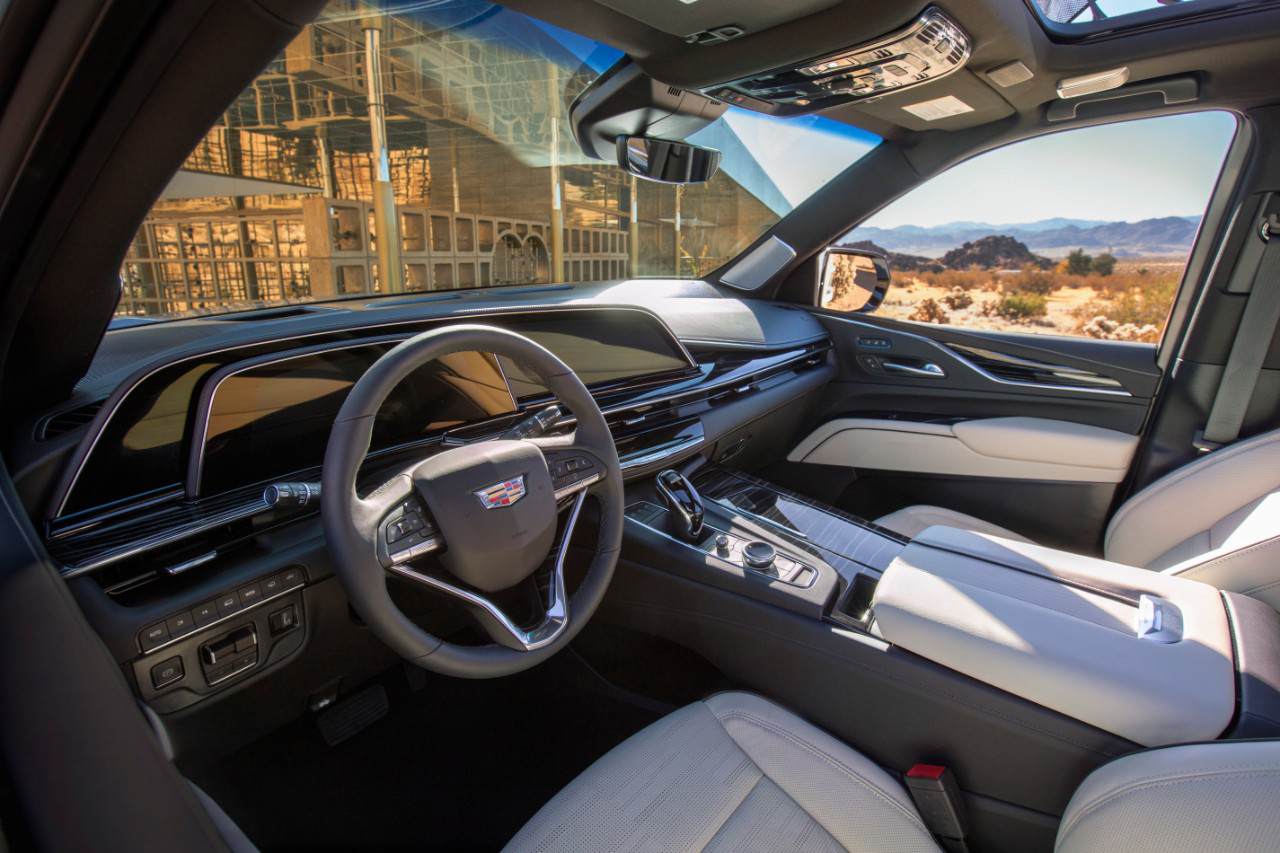 Nothing beats a bench seat, especially if you’re friendly with your co-pilot. As I noted, the dividing console has all sorts of cool features. But it also makes the whole interior feel like a high-tech space capsule. Shoot, the band Cake wrote a song about it, embedded for your convenience below.

There’s no freedom to reach over and put your arm around your sweetheart. And if you’ve never tried bumping down a dirt road with someone special saddled up next to you, that’s too bad. It’s worth more than all the fancy doodads combined.

At first, I loved rolling down gravel roads and jagged city streets in the Escalade. It ran over all of it smooth as butter. And the rearview mirror doubled as a rear-facing camera, so I could see clearly behind me.

Blindspot sensors always told me when there was a car alongside my quarter panel, so I didn’t have to swivel. And, despite my frustrations with it, I know passenger and driver can dial in the perfect climate control, so you’re not cranking the heat and rolling down a window on one side.

But turns out, I love feeling the bumps on the road. I like moving my mirrors around. I enjoy turning my head to check over my shoulder. And I like having the windows down.

It all adds to the experience of driving. It makes me feel like I’m doing the driving, not the car. It makes driving a multi-sensory experience. Heck, if you’ve got a messed up hose somewhere, you can smell the ride too! 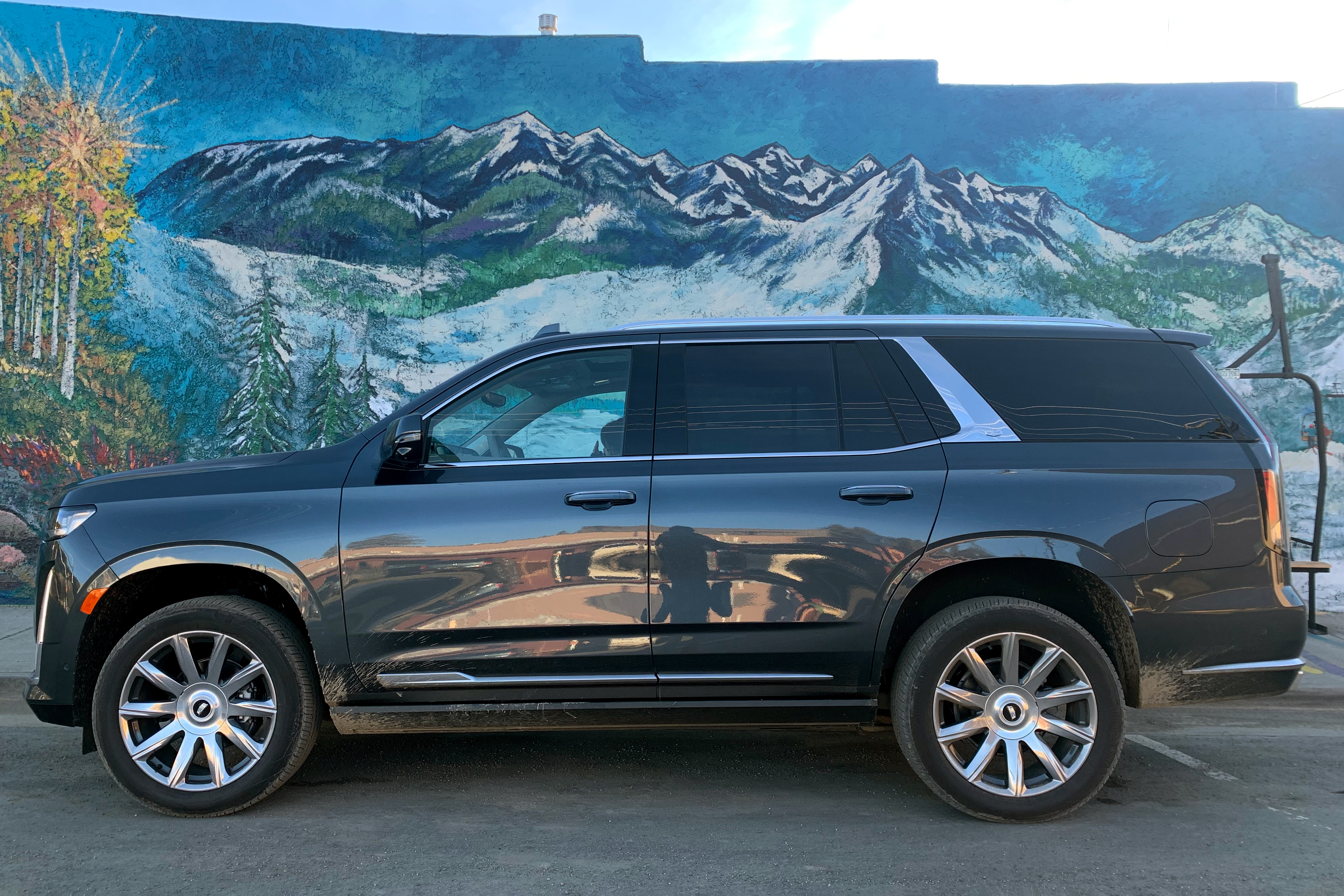 If you enjoy ease, comfort, and really cool tech — oh, and if you have six figures burning a hole in your pocket — the Escalade is a sweet ride. It really is.

But if you enjoy driving as an experience and appreciate a few flaws as just added “character,” you’d do well to find yourself an old pickup. Heck, I’ll sell you mine … for $100,000.

5 Must-Have Campervan Accessories for Life on the Road

The Best Bike Phone Mounts of 2021

No More Guessing: This Website Gives Video Tours of Campgrounds and Campsites

PlayStation 5 Could Get an Update to Unlock M.2 Expansion Slot...

cloudfrugal - February 26, 2021
0
PlayStation 5 may get a firmware update this summer that will unlock its M.2 expansion slot. The console launched in November 2020 with...

The Bestselling Gear at Amazon This Week

PUBG Lite Will Not Be Playable Anymore From Today, April 29;...

Cloud and the new ‘Generation 3’ of business intelligence