With more safety features than any other bike helmet made, the Kortal MIPS Race gives riders the best chance of walking away from a bike crash.

With bikes becoming more capable, and riders going bigger on a regular basis, POC has stepped up its helmet protection with the Kortal Race MIPS, an all-mountain bike helmet for aggressive trail and enduro riders.

The helmet has a long list of safety features, some brand-new, and all of them released under POC’s new “Whole helmet concept.”

“Even if safety is better understood … we have to keep looking ahead to consider and evaluate what we have and what we need for the future,” POC CEO Jonas Sjögren said. “Our Whole helmet concept illustrates that in today’s world, a helmet can, and should, do significantly more than just manage impacts.” 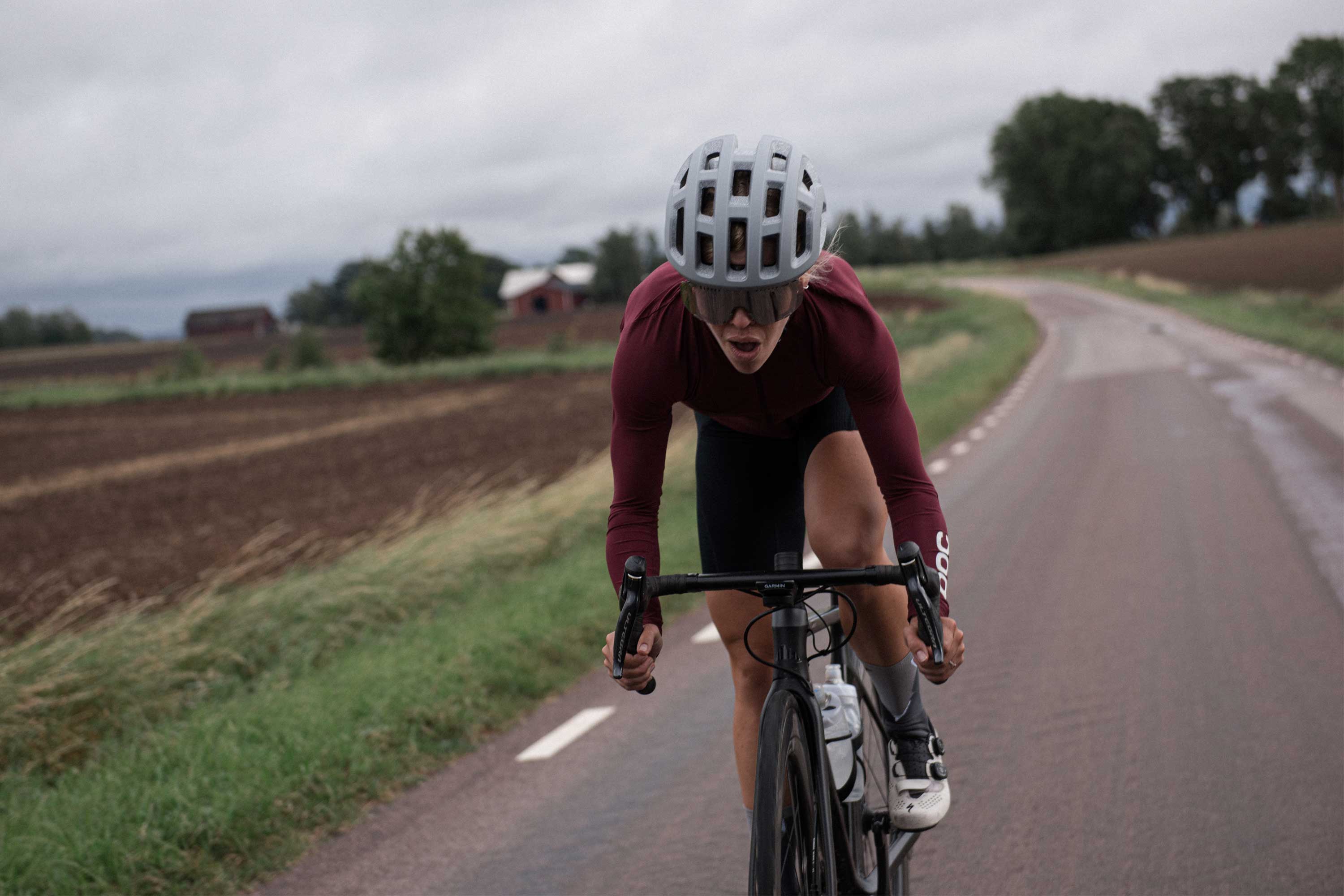 At the heart of the helmet is a new system, co-developed by POC and MIPS, that not only won’t get caught in your hair but is also more or less invisible. POC was the first brand to introduce MIPS technology in a bike helmet, and the brands have been partners since 2009, save a short hiatus when POC went its own way to develop POC Spin.

Now, POC Spin is part of MIPS Integra. The slippery yellow layer of plastic that once defined MIPS is now invisibly in-molded into the Kortal Race’s EPS foam, similar to how a helmet’s polycarbonate shell is attached. That lets the Kortal Race MIPS’ pads, indistinguishable from POC’s SPIN Pads, slide against the low-friction layer for a lower-profile, rotational-impact-absorbing solution that doesn’t interfere with the helmet’s vents.

Similar to previous MIPS systems, the in-molded layer lets the helmet pads move in any direction on impact in an oblique fall, reducing the force transmitted to the user’s head and brain.

With the launch of Integra, POC will phase out Spin as a standalone protection solution. Representatives for POC said that with the new Integra system and Spin pads, there will be no compromise on safety, aerodynamics, ventilation, or fit. 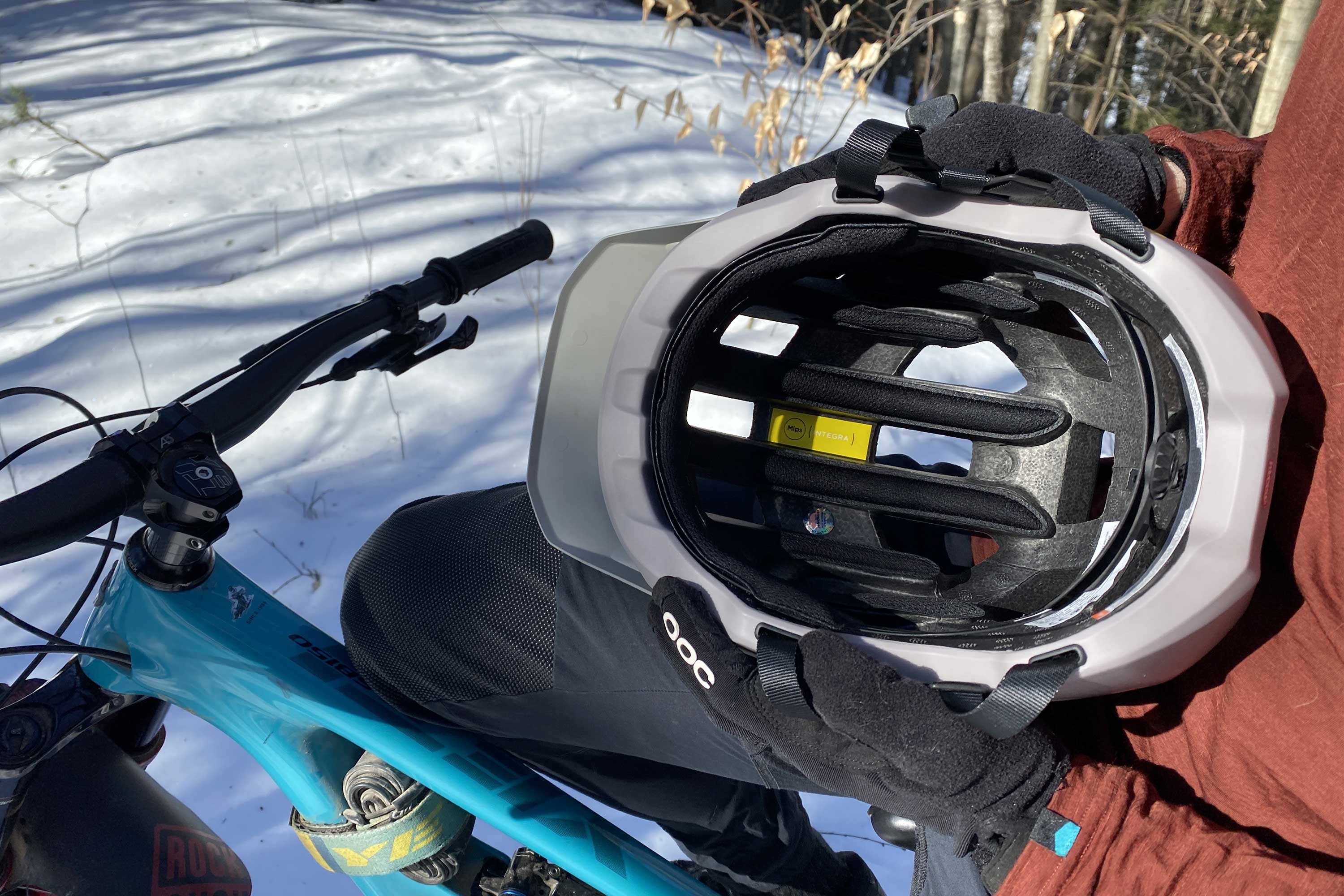 The Kortal Race MIPS has eight vents in the front, three on top, and five oversized air ports in the rear, making this literally the coolest mountain bike helmet POC has ever made.

Between the vents, POC reinforced the helmet with Aramid bridges, the same stuff that’s in ballistic body armor, to give the Kortal Race MIPS maximum structure and give your brain the best available protection. 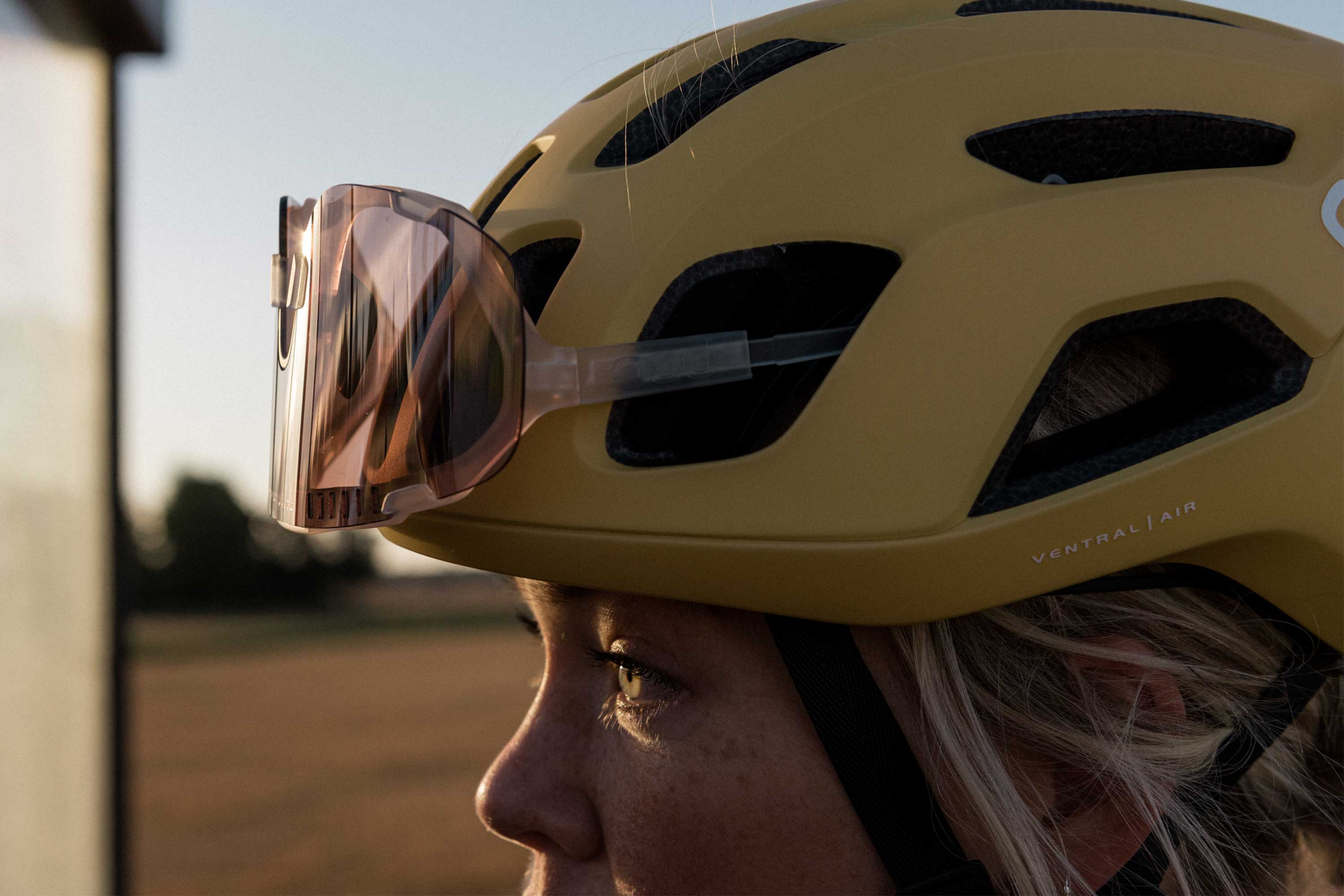 The Kortal Race’s visor has three positions, including one with space to perch goggles on the front brim. But the visor is now designed to snap off if extended past the highest position in a crash.

That protects a rider’s neck from getting snapped back in a fall, further minimizing potential injury. 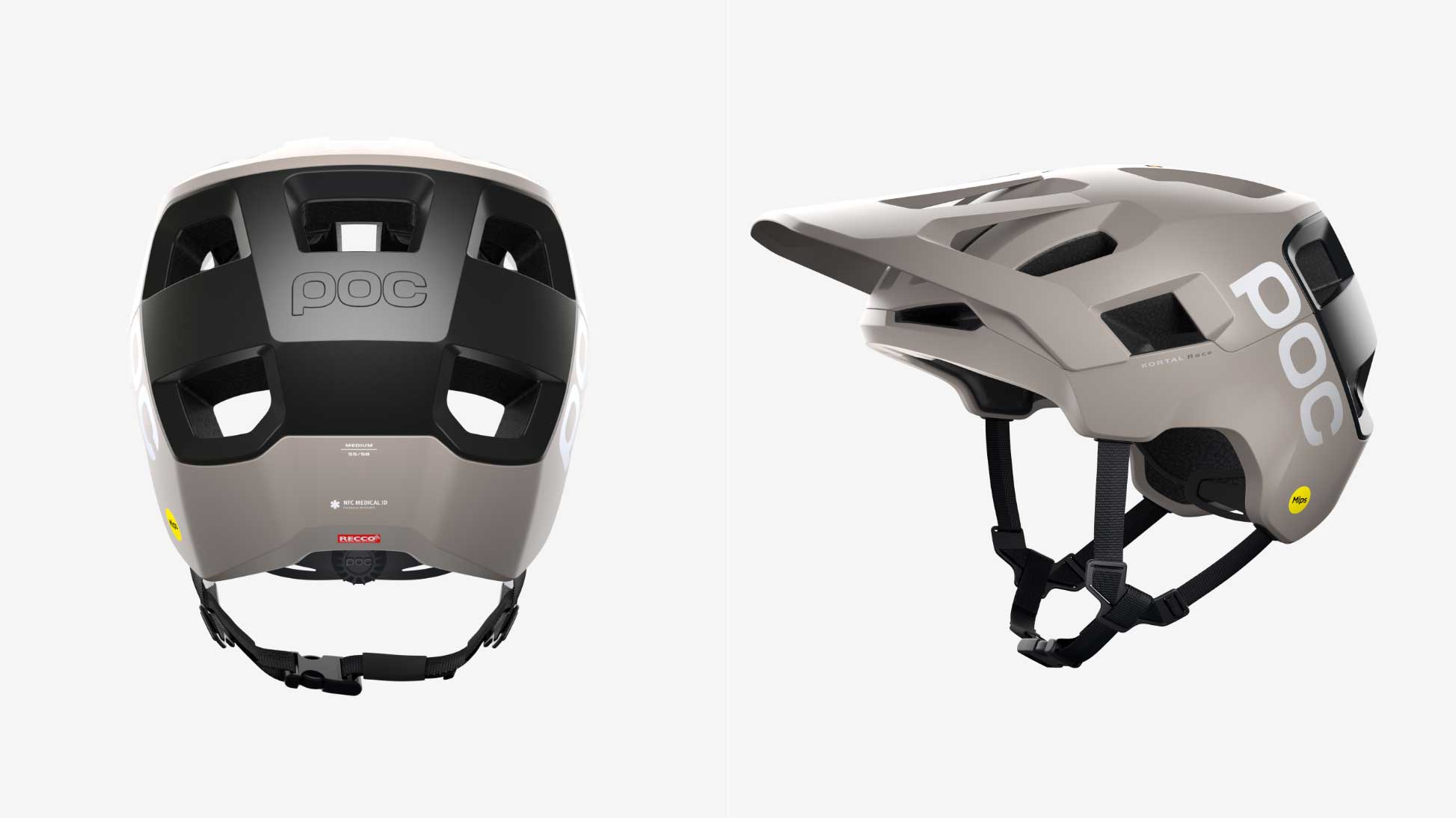 If you’re injured while off the grid, especially in the mountains, a RECCO reflector helps searchers find you. So POC built one in.

And if a rider can’t communicate when rescuers arrive on the scene, rescuers can scan the NFC chip in the helmet to access the rider’s data and medical records. 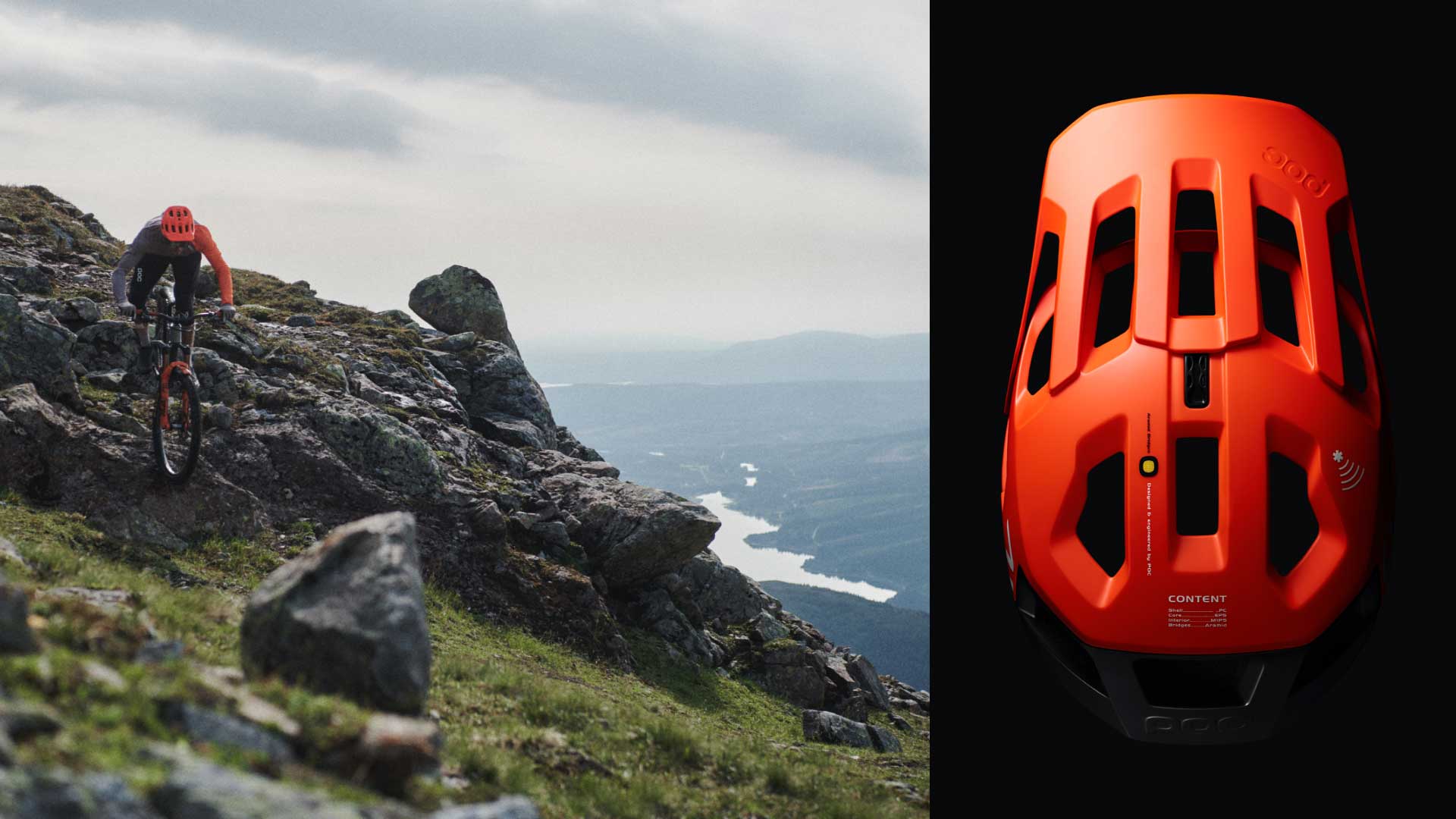 After wearing this helmet for 2 weeks, I can confirm it’s the best-fitting and most comfortable POC helmet I’ve worn. The ventilation was awesome. And despite all the bells and whistles, the helmet also feels light.

The size medium I tested weighed 14 ounces. I was super impressed with how well my glasses stayed in the rear vent ports with the helmet on. That was a most welcome improvement. In fact, the vents secured shades so well I could leave them there when I donned goggles for the descent. And with goggles on my face or under the visor, the strap fit seamlessly between vents without blocking them.

Another improvement that caught my attention was the lack of an awkward plastic layer inside the helmet. I always wear MIPS helmets because I believe in the system. But that yellow plastic liner always got tangled in my hair and made my helmets rattle.

Plus, I loved — and was thankful for — the full coverage this helmet provided on the back of my head. It was comfortable and didn’t attract attention. And while I didn’t crash in this helmet (yet), it’s the helmet I’ll wear this season in case I do! 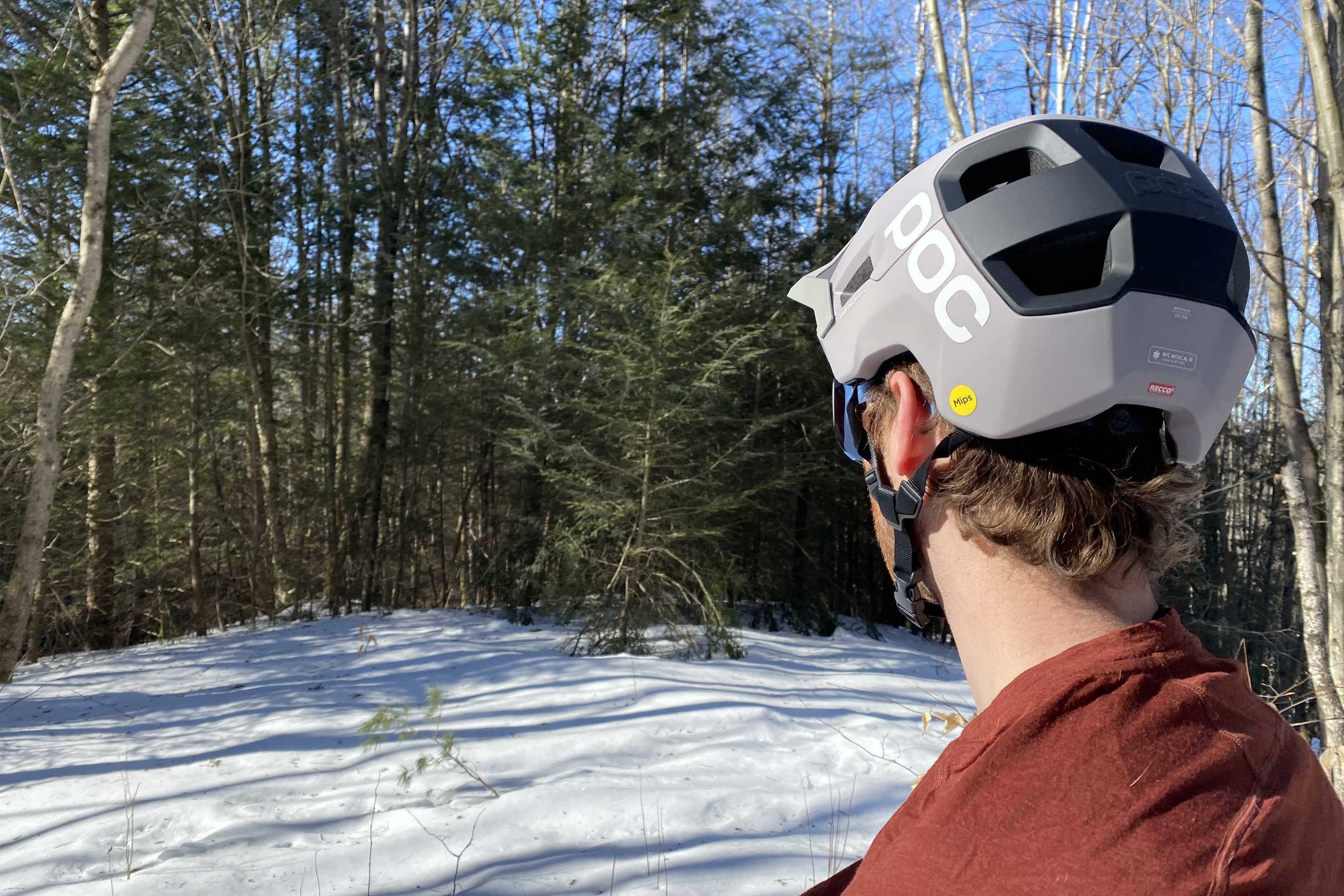 When my glasses and helmet work as a unit, I feel it further enhances my riding safety. It helps me see my line and react fast. I tested the Kortal Race MIPS with POC’s Devour sunglasses. The shades use POC’s color-spectrum tuning Clarity lenses, which in the Devour are wider than the frame for nearly goggle-level eye coverage. The lenses are also swappable.

The sunglass temples had a four-position adjustment and an adjustable nose piece that helped me dial in the fit. Past POC glasses have fogged on me, but these didn’t. They had superb ventilation and loads of peripheral vision.

The frame was in sight on all sides, but that didn’t interfere with my view. Though I smeared the 100% UV-protective glasses when I changed lenses, a mess that cleaned up easily, they’re treated to repel dirt, oil, and water. And they offer an anti-scratch coating. They come with a single lens, but POC sells a clear lens separately.

The debut of the Kortal MIPS Race and POC’s new Whole helmet concept launches a new era for the brand.

“With our renewed partnership with MIPS, we know that rotational impact protection will be in good hands,” Sjögren said. “Our job will be to expand our curiosity, open-mindedness, and to leave no stone unturned in search of new innovations and enhanced safety for the benefit of all.”

The Kortal Race MIPS and the Devour sunglasses retail for $250 each. The Kortal, which has a similar design and fewer safety features, is $200.

Spice Up Your Interval Training With This ‘One-Minute Cutdown’ Workout

PlayStation 5 Owners Banned for Selling Access to PS Plus Collection...

cloudfrugal - January 4, 2021
0
PlayStation 5 owners are reportedly being banned by Sony for selling access to the PS Plus Collection that they got for free, to...

What you need to know about soaring enterprise machine learning investments

One Day Only: Get a Free Insulated Owala Water Bottle

Electronic Arts Buys Glu for $2.1 Billion to Tap Into Growing...